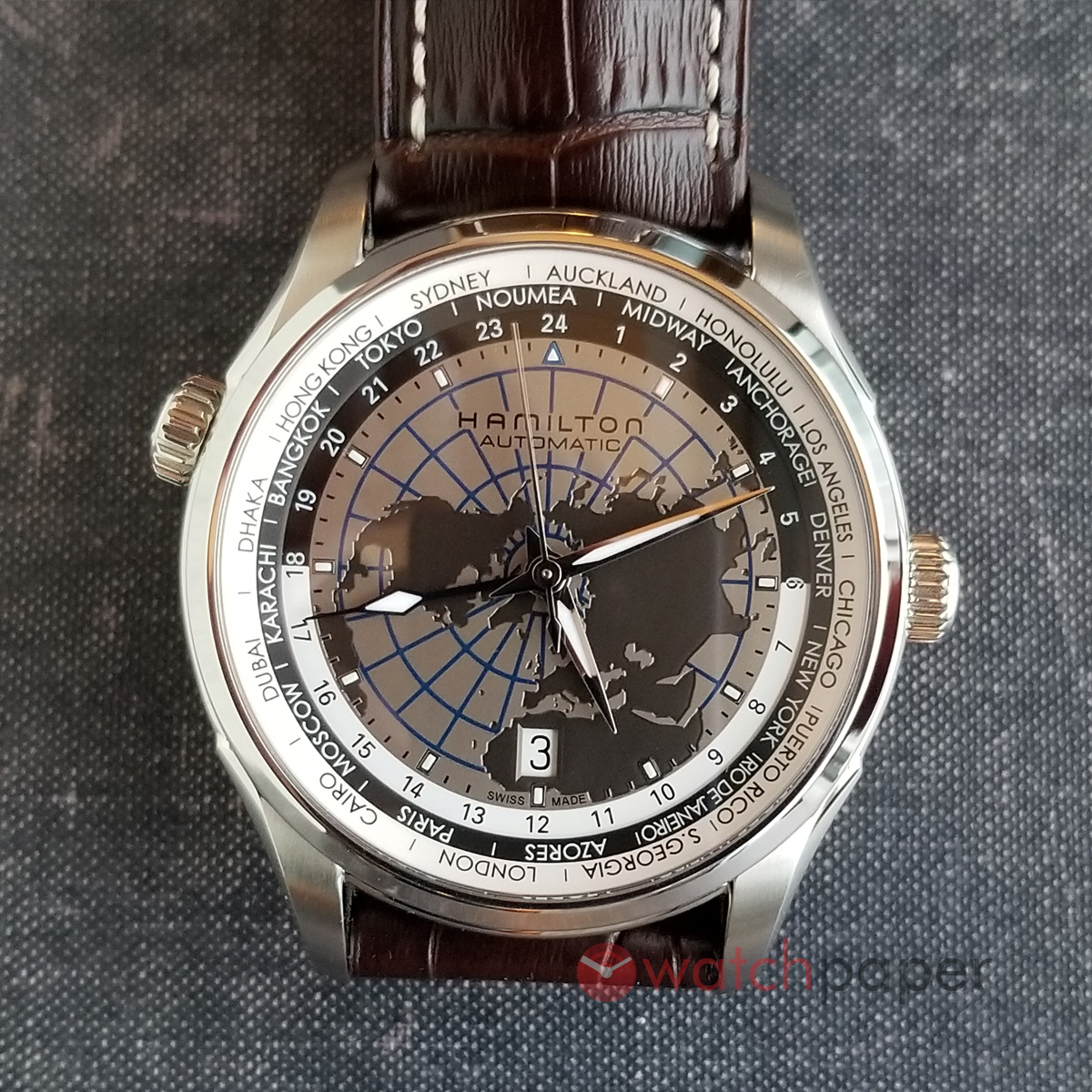 A Week on the Wrist: Hamilton Jazzmaster GMT World

If there was a school for this complication, I would have to be placed in a remedial class for it. Setting up a GMT – let alone reading off time zones like a pro – hasn’t been an easy task for me. I counted it a personal victory when I managed to set my Kinetic Tuna to track military time correctly. I took it personally when I set, reset, and had to again reset my Steinhart GMT while on a business trip to the west coast. This was only to track time back home in Toronto. Adding three hours to local time wasn’t the point. I wanted the watch I paid good money for to add those three hours for me.

So, it was with some trepidation that I strapped the Hamilton GMT World to my wrist last week. Would I “get it” this time? Fortunately for me, the latest edition of Hamilton’s Worldtimer is as easy to operate as it is handsome to look at. Once you adjust the 24-hour hand to the correct military time (via the crown at 3 o’clock) the time zones are easy to read after you align your local zone (using the crown at 10 o’clock) to the GMT hand. After declaring victory, I moved on to enjoying the watch. Previous iterations of the watch had a simple, unadorned dial. Case, movement and hands carry over from the previous edition, but the big change, and the one that vaults the piece into a different category, is the dial. Updated with a world map and time zones, the dial declares the watch’s aspirations and dresses it up to the point where it can comfortably sit beside much more expensive offerings from the likes of Frederique Constant and Montblanc. The addition of the map is more in keeping with the watch’s purpose. You know explicitly what the watch is about. And that’s a good thing. There’s a lot going on with the updated dial. The world map, with its subtly recessed continents, indicates time zones via a web of blue lines fanning out from the North Pole. The 24-hour chapter ring is split into two colours indicating day and night. Local time hour markers are small, applied indices, with 12 o’clock set off by a blue-outline triangle. The world time works through an internally rotating bezel (with major city names printed on two contrasting rows) controlled by a screw-down crown at 10 o’clock. If that sounds like a lot of information in a 42mm package, it is. Initially worried about legibility, I had no trouble reading the time at a glance. The lightly-lumed dauphin hands are easy to pick out on the go, even in low-light conditions. The GMT hand is blued steel with a large, lumed, diamond arrow at its tip. The lume won’t win any brightness or longevity awards but it is more than adequate for a tooled-up dress watch. The date window at 6 o’clock doesn’t unbalance the dial because its simple black-on-white colour scheme fits into the white AM section of the chapter ring. Despite all the action, Hamilton’s restrained and harmonious colour scheme keeps the functional elements in proportion to one another. Other worldtimers I’ve played with have maps that are a riot of colour, making it work to see anything besides the map. The case is perfectly proportioned, even for my pipe cleaner wrists. At 42mm across and 11.5mm tall, there’s enough breathing room for the hard-working dial to do its job of telling you what time it is in, say, Anchorage, but it’s also compact enough to fit easily under a dress cuff. The case has a mix of finishes, from the mirror polish on the outer bezel and sides to the satin-finished lugs that appear to reach out from the strap to hug the main body. The result is a layered and visually interesting package for the movement and dial. The real achievement here for me is the slimness of the case. Where some Jazzmasters I’ve owned look the part of a dress watch, the effect is spoiled somewhat by the chunkiness of the case. Not so here. The movement is based on the ETA 2893-2 and its vertical dimension keeps this watch comfortably and honestly in the dress watch category. The watch I tested showed about +5 seconds/day of drift. The advertised power reserve of 42 hours fell about 18 hours short when I tested the feature, so you’ll want to store it with a full wind when storing it for the weekend. At around $1500 CDN retail it’s hard to think of any close competition with this level of quality at the same price point. The Hamilton GMT World’s dramatic dial upgrade take the watch beyond the previous generation’s more modest design and puts it into a category occupied by much more costly alternatives.