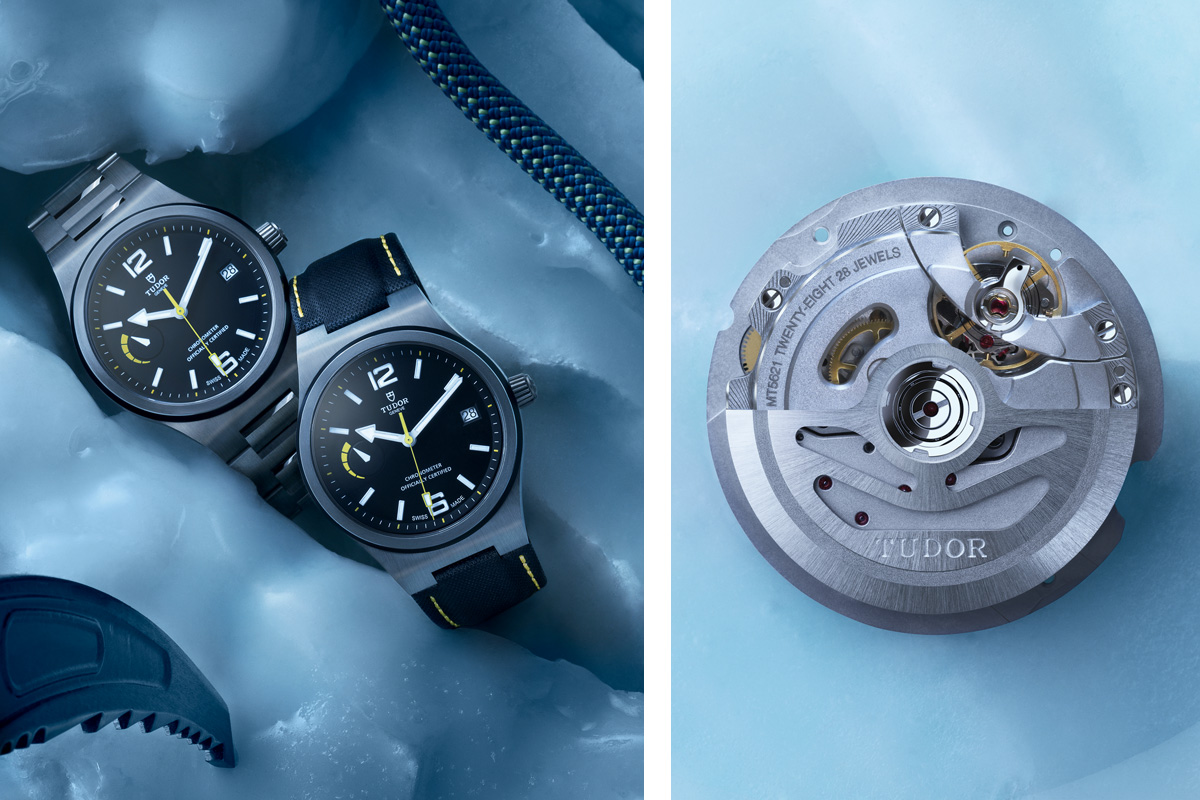 One of the most important announcements at the 2015 Baselworld was the introduction of the Tudor’s first in-house movement, baptized Tudor MT5621.

Throughout its history, Tudor became known for its robust tool pieces, powered by equally sturdy and reliable movements that were sourced  from different manufacturers, mainly ETA. The MT5621 is the result of Tudors repositioning and desire for more independence. This COSC-certified chronometer is beating at 28,800 vibrations/hour and it is fitted with a variable inertia balance with silicon balance spring, held by a transversal bridge that is secured at each end to fully withstand shocks and vibrations.

One of the first watches to be powered by this new movement is called the North Flag, a model honouring the members of the British North Greenland Expedition that int he early 1950s wore Tudor Oyster Prince watches while carrying out a series of experiments in extremely hostile conditions.

The 40 mm stainless steel case of the North Flag is satin finished and it features a screw-down crown, offering 100 meters of water resistance. The matt finished black dial with its contrasting bold white indexes and hands, offers excellent readability. At three o-clock we find a date window, while at 9 the power reserve indicator with its yellow markings is proudly showing the 70 hours of power reserve that the MT5621 is capable of delivering. The back of the Tudor North Flag

The back of this angled case will reveal the automatic caliber through a scratch resistant sapphire crystal. In 2015 the Pelagos gets the new in-house calibre Tudor MT5621 and it is also offered with a blue dial and bezel.

The Pelagos is one of Tudor’s most popular models and this year it start receiving the new in-house calibre MT5621, with its long lasting autonomy. Apart the benefits of the new caliber that described above, the Pelagos collection is extended with a new colour combination for the dial, bezel and rubber strap. In addition to its original matt black version, this model is now available in matt blue, the emblematic colour of the brand’s divers’ watches since the 1960s and the one chosen by the French Navy for the TUDOR Submariners that have been used in great numbers by its divers. The dial of the new Pelagos is a bit busier, at six o’clock we got four lines, instead of two as on the original model. It keeps the sturdy 42 mm satin finished titanium case, with helium escape valve and the screw-down triple waterproofed crowned. This professional diver is guarantied water resistant to a depth of 500 m.

The new Pelagos should hit the shelfs this summer with an expected MSRP of $4,300 US. The Fastrider collection is the result of the partnership between Tudor and Ducati. Their adventure started in 2011, when the first Fastrider was launched, Tudor’s homage to the world of performance on two wheels. This was followed by the Fastrider Black Shield, launched in 2013, with a matt black ceramic monobloc middle case. It was an experience that continued with the customization of a Ducati Diavel using the same aesthetic language. In 2015, TUDOR continues on the path of aesthetic juxtaposition by offering a new Fastrider chronograph inspired by one of the most famous Ducati models: the Scrambler.

The new Fastrider collection comes with three colour choices, all reflecting the various Scrambler versions: bright yellow, the model’s historic colour, olive green for a powerful urban look and red for a retro-chic effect. The sturdy, utilitarian look of the watch is reinforced by the matt black ceramic bezel and the black PVD coated pushers. These wrist-Ducatis are powered by a Valjoux 7753 automatic chrono, offering 46 hours of power reserve. They come with a black leather strap or on black rubber.

As always, Tudor has delivered exceptional watches, while keeping the price affordable. The new in-house caliber is an exciting development, cementing the value of the brand with a shield. Before you go, here are a few really cool videos from Tudor, presenting their 2015 lineup:

For more about Tudor, go to www.tudorwatch.com