Melchior is highly sophisticated table clock with the shape of a robot.

Melchior was one of the stars of Baselworld 2015. The almost one foot high robot is part of MB&F’s Anniversary Pieces, a collection that celebrates a decade of existence of Maximilian Büsser & Friends, one of the most exiting horological laboratories of today.

Conceived and developed by concept lab MB&F, and engineered and crafted by L’Epée 1839 – Switzerland’s only specialised high-end clock manufacture – Melchior is the result of Maximilian Büsser’s childhood dream to have a robot friend:

“As a 10-year-old fan of Star Wars, I knew Luke Skywalker could never have prevailed had it not been for droids like R2-D2 – a loyal, resourceful and brave robot who was always saving his friends. As an only child, I imagined having my own robot companion… Melchior makes that childhood fantasy a reality.”

Büsser developed the concept with designer Xin Wang, selecting a high-end L’Epée clock movement and reimagining it as the mechanical head and torso of a robot.

Melchior comprises no fewer than 480 components — each one machined and finished at L’Epée’s Swiss atelier — with 334 components being used for the movement, while another 146 pieces comprise Melchior’s bodywork and armour. Melchior seen from the front and from the back.

The winding/time-setting key clips into Melchior’s left elbow joint socket. It is held by a small magnet strong enough to hold the key, but not so powerful as to affect the function of the movement. The key boasts a double-depth square socket that neatly fits over both of the square pegs on the back of Melchior. One of the pegs is for winding the movement, the other for time-setting.

Working from MB&F’s design, L’Epée diligently developed the various bodywork and armour components, carefully choosing materials according to the properties required. Where precision was critical – Melchior’s kinetic parts or his precision rocket launcher, for instance – plated brass was selected. His armour on the other hand is crafted mainly in stainless steel, providing optimal resistance to withstand any enemy attacks. And for the finishing touch, L’Epée have applied a range of eye-catching finishes to Melchior’s bodywork – including anglage, mirror polishing, satin finishing, circular satin finishing, sand-blasting and polishing. A closer look at the MB&F Melchior Light

For clear reading of the hour, L’Epée developed a ‘slow’ jumping hour. This in-house complication sees the hour disc remain static for 55 minutes, then start to turn five minutes before the new hour so that the change of hour is smooth and subtle.

The movement regulator features an Incabloc shock protection system, which minimises the risk of damage when the clock is being transported. This sort of shock protection is generally only seen in wristwatches. In fact, Melchior’s exclusive table clock movement features the same type of mechanisms as a wristwatch – gear train, mainspring barrel (here five, in series), balance wheel, escape wheel and anchor – but their dimensions are far larger.

The movement also features superlative fine finishing – Côtes de Genève, anglage, polishing, sand-blasting, circular and vertical satin finishing – that is seen on a wristwatch. However, finely finishing a clock movement is far more challenging than finishing a wristwatch because of the greater surface areas of the larger components. L’Epée CEO Arnaud Nicolas explains:

“It’s not simply a case of double the size of the components, double the time it takes to finish them. The complexity increases exponentially. For polishing, for example, you need to apply the same pressure as when finishing a watch movement but on a bigger surface. Any variation in that pressure will show up in the finishing, so a skilled and steady hand is required to apply uniform pressure.” Melchior also comes in a “Dark and Light” armor

The story behind the name “Melchior” is quite interesting as it is rooted in history of the Büsser family. Max Büsser explains:

“In the Büsser family, for over five centuries from the 1400s onwards, every eldest Büsser son was either called Melchior or Balthazar. It alternated. My grandfather was called Melchior and hated it, so he had everybody call him Max, which is how I became a Max. My grandfather hated the Melchior-Balthazar thing so much that he put an end to this 500-year-old tradition by calling my father Mario… Now, a century later, I happen to love the name Melchior!”

Melchior is limited to 99 pieces

For more about Maximilian Büsser & Friends, go to www.mbandf.com, while to learn more about L’Epée 1839, go to www.lepee-clock.ch 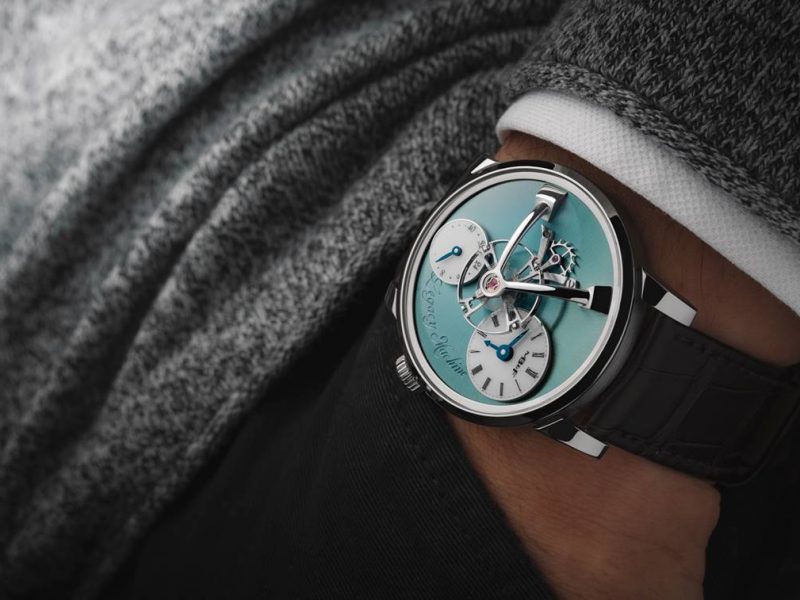